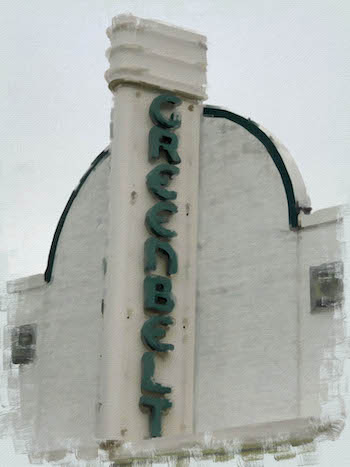 Join the staff of the Old Greenbelt Theatre as we say a final “thank you” and “goodbye” to our current auditorium.

On June 3, we’ll be closing the main auditorium for major renovations (new roof, new HVAC, new seats, new draperies, new screen, and other A/V improvements). But in Marie Kondo style, we’re going to thank the current auditorium for its incredible service over the last 40 years.

We’ll be screening the classic film Cinema Paradiso. The film is a love letter of sorts to vintage cinemas everywhere, so we can’t think of a better film to help us say goodbye for now!

Ticket sales and donations for this event support our Beyond the Screen Initiative.

Cinema Paradiso offers a nostalgic look at films and the effect they have on a young boy who grows up in and around the title village movie theater in this Italian comedy drama that is based on the life and times of screenwriter/director Giuseppe Tornatore.

The story begins in the present as a Sicilian mother pines for her estranged son, Salvatore, who left many years ago and has since become a prominent Roman film director who has taken the advice of his mentor too literally. He finally returns to his home village to attend the funeral of the town’s former film projectionist, Alfredo, and, in so doing, embarks upon a journey into his boyhood just after WWII when he became the man’s official son.

In the dark confines of the Cinema Paradiso, the boy and the other townsfolk try to escape from the grim realities of post-war Italy. The town censor is also there to ensure nothing untoward appears onscreen, invariably demanding that all kissing scenes be edited out. One day, Salvatore saves Alfredo’s life after a fire, and then becomes the new projectionist. A few years later, Salvatore falls in love with a beautiful girl who breaks his heart after he is inducted into the military.

Thirty years later, Salvatore has come to say goodbye to his life-long friend, who has left him a little gift in a film can.