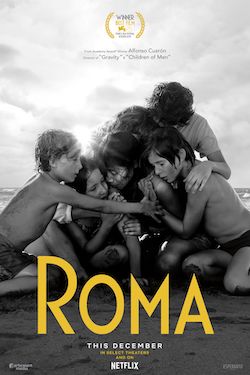 Sharada Balachandran Orihuela is Associate Professor of English and Comparative Literature, and affiliate faculty in the Latin American Studies Center at the University of Maryland, College Park. She teaches courses in Hemispheric American Studies and literature of the Americas, along with critical race and gender theory. She has received numerous awards including the Research and Scholarship Award at the University of Maryland, the Marilyn Yarbrough Dissertation and Teaching Fellowship, and held the UC MEXUS- CONACyT (Consejo Nacional de Ciencia y Tecnología) Doctoral Fellowship.

The most personal project to date from Academy Award (R)-winning director and writer Alfonso Cuarón (Gravity, Children of Men, Y Tu Mama Tambien), “ROMA” follows Cleo (Yalitza Aparicio), a young domestic worker for a family in the middle-class neighborhood of Roma in Mexico City. Delivering an artful love letter to the women who raised him, Cuarón draws on his own childhood to create a vivid and emotional portrait of domestic strife and social hierarchy amidst political turmoil of the 1970s. Cuarón’s first project since the groundbreaking “GRAVITY” in 2013, “ROMA” is being released on a limited basis to theaters, only 600 nationwide.

“The complete experience of ‘Roma’ is unquestionably in a movie theater.” – Alfonso Cuarón to Variety.

“There is never a moment here when you aren’t reminded that Cuarón is a world-class filmmaker, one who is in full command of his craft and capable of creating a film that’s both epic in scope and as intimate as a whisper.” – Peter Travers, Rolling Stone.