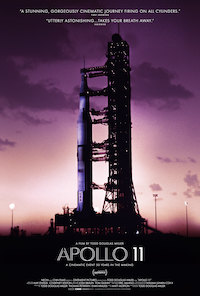 Join us to hear from Dr. Matthew Shindell and Heidi Holmstrom following the 7:30 pm screening of Apollo 11 on Friday, March 15.

Dr. Matthew Shindell is a historian of science whose work focuses on the history of the earth and planetary sciences, with an emphasis on the development of research programs in these fields during the Cold War. He curates the Museum’s collection of spacecraft, instruments, and other artifacts related to the exploration and study of the solar system. Dr. Shindell spoke with our patrons as a guest speaker during our run of First Man, and returns today to speak about this documentary version of the same tale.

Heidi Holmstrom is a Motion Picture Preservation Specialist at the National Archives and Records Administration. She works to preserve and provide public access to films collected and created by Federal government agencies, including NASA.

APOLLO 11 is a cinematic space event film fifty years in the making. Featuring never-before-seen large-format film footage of one of humanity’s greatest accomplishments. Never-before-seen footage and audio recordings take you straight into the heart of NASA’s most celebrated mission as astronauts Neil Armstrong, Buzz Aldrin, and Mike Collins embark on a historic trip to the moon.

“Timed to the upcoming 50th anniversary of the lunar landing, “Apollo 11” was compiled partly from a previously forgotten trove of 70mm film that includes footage from the launch, the Cape Canaveral crowds watching outside J.C. Penny’s and along motel balconies, and the astronauts’ recovery. It features no talking heads or narration, just audio from some 11,000 hours of NASA audio recordings and, occasionally, the sonorous gravity of Walter Cronkite’s broadcasts.” – Jake Coyle, The Associated Press