From an early age, I’ve loved relics from decades before me. My mother’s love of antiques may have fueled it. Don’t get me wrong—I can appreciate an old vase, but I’d much rather watch a film filled with vintage stars. While my tween peers were watching the film version of Annie, I was watching Gone With the Wind, Casablanca, The African Queen, The Maltese Falcon…you can see where this is going. After watching Casablanca (1942), it became my favorite. I fell in love with Humphrey Bogart—an unlikely paramour 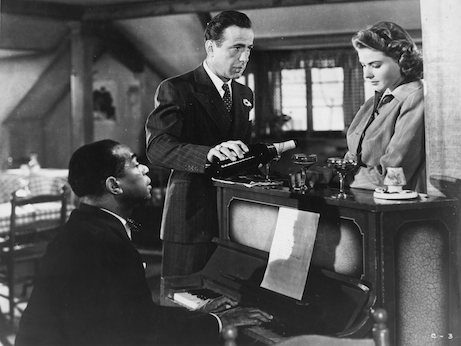 for an eleven year old, but what can I say?

The film was slated for OGT’s April Monday Matinee. Sadly it was cancelled due to the coronavirus pandemic. I watched the movie again anyway. It all came rushing back and I remembered why the younger version of myself became hooked. WIth its film noir style, it has a mystique—the perfect medley of romance, history and intrigue. The film is chock full of clever lines, both dramatic and witty. The dialogue is intoxicating. It creates a quick pace, building tension and cultivating the characters’ entanglements. Here’s a glimpse into why Casablanca remains my favorite classic film.

“Round up the Usual Suspects”

The film takes place during World War II in the Vichy-controlled city of Casablanca, Morocco. Rick Blaine (Humphrey Bogart) is a curmudgeonly expatriate who runs Rick’s Cafe Americain, a bar and gambling paradise. The story kicks off as two Germans are murdered on a train heading for Casablanca. Rick’s place becomes a magnet for French Captain Louis Renault (Claude Rains), German Major Strausser (Conrad Veidt), and their cronies. Among the Cafe’s other regulars are refugees looking for ways to escape to the United States. Now, a murderer (Peter Lorre) is headed to Casablanca with coveted swag: travel visas.

“What in heaven’s name brought you to Casablanca?” 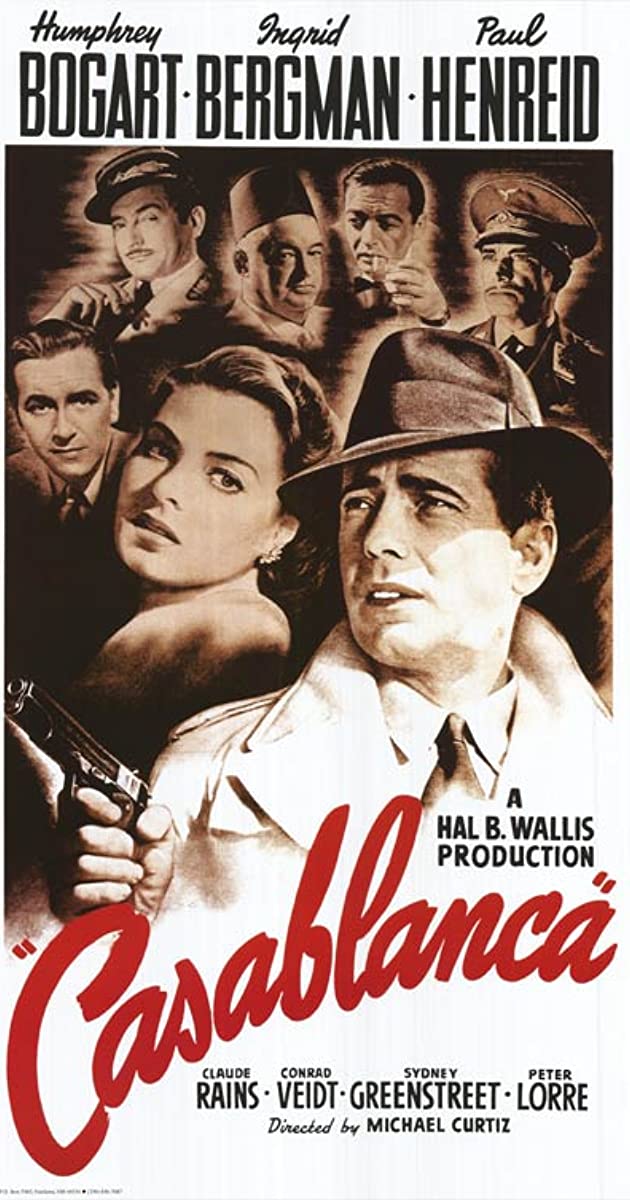 Add to this, Victor Laszlo (Paul Henreid), a fugitive resistance leader, and Ilsa Lund (Ingrid Bergman), his wife, show up at the cafe. To say, it opens a can of worms is an understatement. We learn that Rick’s cynical disposition is a by-product of his lost love, Ilsa Lund. Yes! The same Ilsa that has just entered his club with her husband. Ilsa and Rick had a tryst in Paris and fell in love. They planned to leave the city before the imminent German invasion, but Rick was stood-up at the train station. Ouch.

“You know what I want to hear. … You played it for her, you can play it for me!”

The musical score is captivating. In a memorable scene at the cafe, the music steps up to depict an impromptu war. There is a duel of anthems. German Captain Strauss leads his officers in a sing along of “Die Wacht am Rhein.” Not to be shown up, Laszlo cues the band to play “La Marseillaise.” Before the band plays, they look to Rick for approval. His nod is all the foreshadowing we need to realize his alliance.

Rick and Ilsa’s love song, “As Time Goes By” conjures up bittersweet memories. It is a scene stealer. Sam (Dooley Wilson), the piano player at Rick’s, plays the tune at the request of Ilsa. The sweet melody rocks Rick’s emotions as Sam had been instructed to never play the song again. Later in an empty club, Rick finds solace in a French 75. In a move to test his wounds, he famously commands Sam to play the song. Although he plays it “again,” that word is never part of the famous quote.

“Kiss Me, kiss me as if it were the last time”

The soft lens of the camera captures Bergman’s lovesick eyes in each scene. Even if you’re a pragmatist in the area of romance, it’s hard not to be caught up in the “abandoned at the train station” affair of Rick and Ilsa. Bogart plays the jilted lover turned relationship-phobe perfectly. Until Ilsa reappears in Casablanca and all the emotions rush back like a tidal wave.

Rick reveals his empathetic side, producing the “letters of transit”. In his famous trench coat and fedora on the misty airport runway, he makes the ultimate sacrifice for love. When Ilsa realizes she will be leaving with Victor and not Rick, a tearful plea ensues. Ain’t love grand? This leads into the most iconic two minutes of film. Bogart’s lines in this final scene are prolific—and live on nearly eighty years later.

“If that plane leaves the ground and you’re not with him, you’ll regret it. Maybe not today, maybe not tomorrow, but soon and for the rest of your life.” 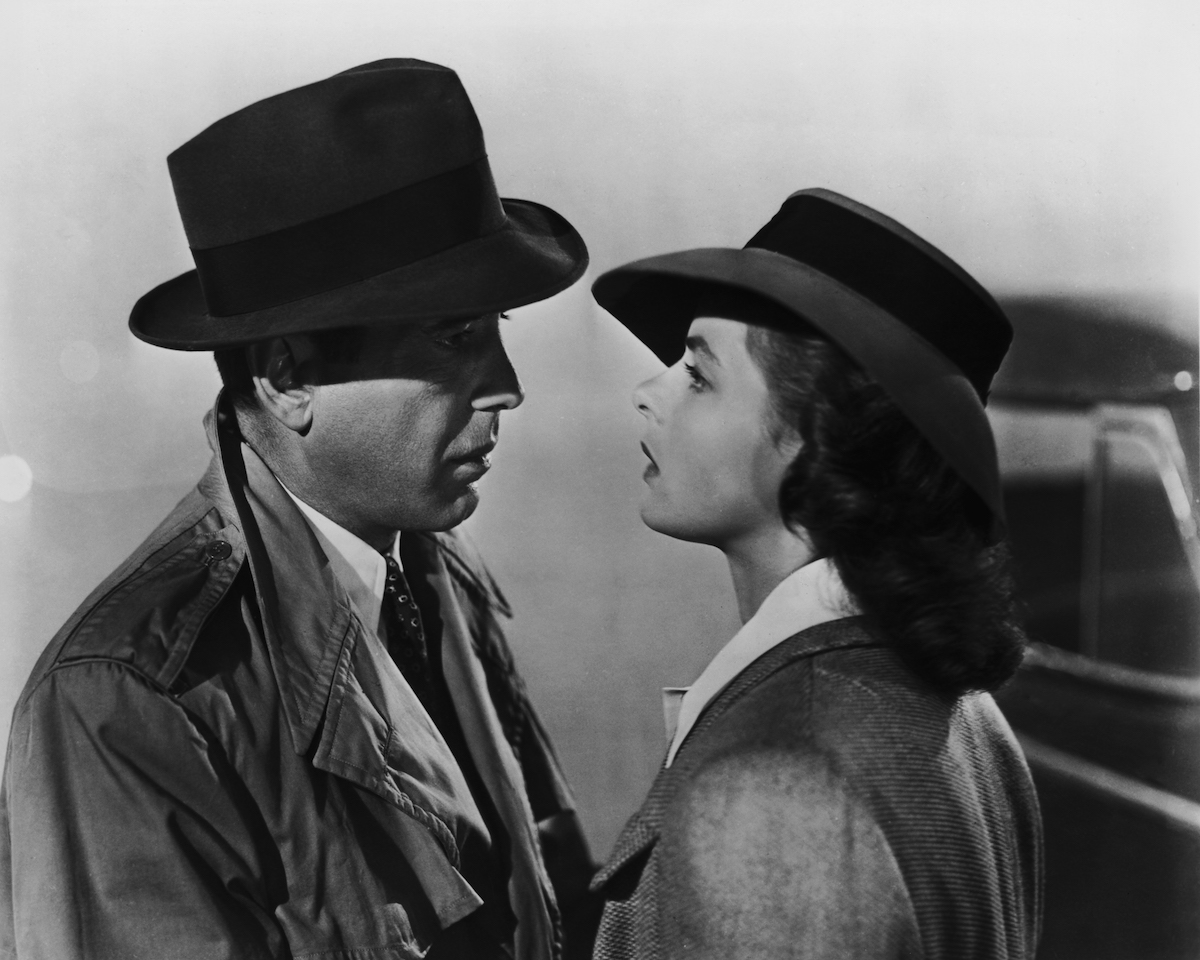 “The problems of three little people don’t amount to a hill of beans in this crazy world.”

If you haven’t watched it, now’s the perfect time. Trust me, it’ll be the beginning of a beautiful friendship. It was for me.

You can catch Casablanca on a number of online rental platforms, like Amazon Video, YouTube, Google Play, and Apple TV. 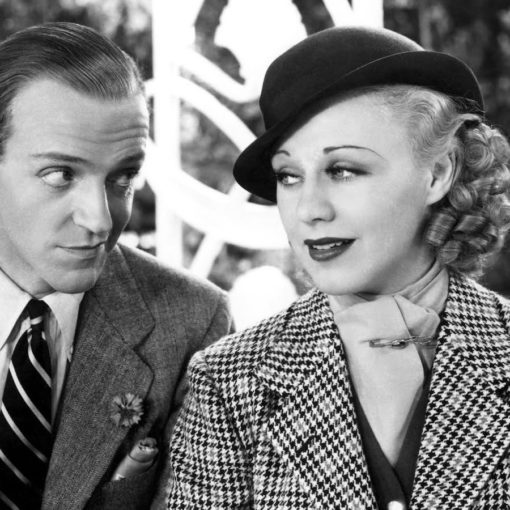 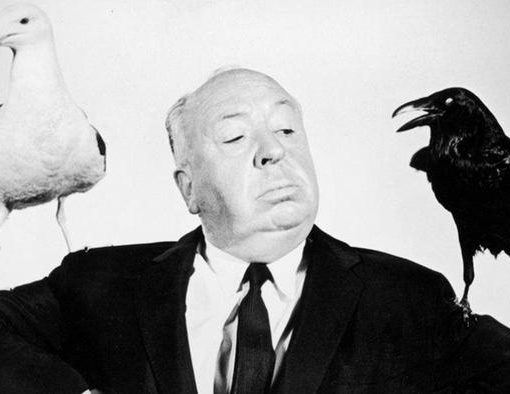 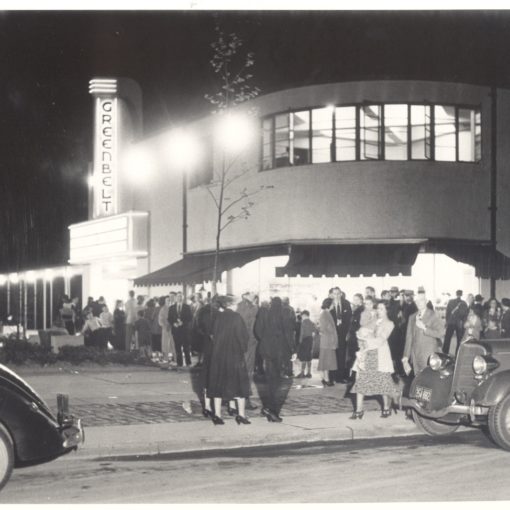